As a company or an individual that has developed an innovative product, you need to make sure, at all times, that you protect your rights over the invention. This is particularly important when you need to talk to a third party about scaling up the prototype and using their manufacturing/ industrial expertise to produce and commercialize it. 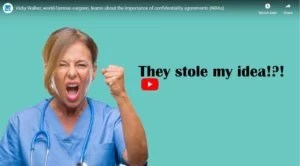 Consider whether the confidentiality agreement should be mutual (also called 2-way).
Generally speaking, a confidentiality agreement will be mutual when both parties are sharing information with each other. In practice, any discussions between 2 parties will involve both of the parties disclosing information about their business! It will be pretty unusual for only one party to be sharing information to the other but if that is genuinely the case then a one-way agreement should be used which only protects the disclosing party. Often using a mutual agreement helps show the counterpart that the clauses apply equally to both parties and that therefore the agreement you are proposing is fair and even-handed.

Consider whether the confidentiality agreement should contain provisions concerning ownership of new IP, including new IP arising out of ideas developed together. Confidentiality agreements often don’t contain these sort of provisions. That is because they are typically used for very early discussions and disclosures where new IP will not be created. In fact, parties might refuse provisions concerning the development of new IP and argue that these sort of provisions need to be agreed upon at a later stage and covered under a separate agreement which deals with the development aspect (and any cost allocation) in more detail. However, if you know that there is a possibility that new ideas might arise from your discussions then it would be a good idea to cover the ownership of the IP in those ideas in your confidentiality agreement. In the case of the prototype, if you think the counterparty might make a suggestion for improving the prototype then you will want to own the new IP in that suggestion so you are free to exploit it.

But, a confidentiality agreement is not fail-safe and once the confidential information has been disclosed it can be too late to do much about it since the information is already in the public domain. You would need to make a legal claim for breach of contract which takes time and costs money.

So, other practical tips are:

For the early discussions, you might want to keep discussions very high level. Do not show the prototype and agree at the start of the discussions (and document it) that you are discussing at high level and will not be discussing any specifics of the prototype or how to improve it. In that case, a simple confidentiality agreement would be sufficient without needing to cover IP ownership.  This is more likely to be accepted by the third party manufacturer and would enable you to have some initial discussions to find out whether this a company you would like to partner with.

Victoria Ferguson / About Author
Victoria is a former member of the L&P team and continues to contribute articles. She is an experienced commercial lawyer and worked for more than 7 years as a senior associate at Logan & Partners. Victoria currently works as an in-house counsel at the UK's Met office.
More posts by Victoria Ferguson
We use cookies on our website to give you the most relevant experience by remembering your preferences and repeat visits. By clicking “Accept All”, you consent to the use of ALL the cookies. However, you may visit "Cookie Settings" to provide a controlled consent.
PreferencesAccept All
Manage consent