Vicky Walker, an experienced French surgeon, came up with an innovative idea about a hip joint that can be worn externally, without requiring surgery.

She made a sketch and designed the prototype herself but needs help to produce it and to start commercializing it. Vicky approaches BigMed, a well-known medical devices company, catches their interest and a meeting is scheduled.

Excited about sharing her idea, during the meeting she shows the prototype and gives BigMed representatives a copy of the sketch as they discuss about potentially working together to produce it.

The medical devices company likes Vicky’s invention and asks to present the prototype at an upcoming medical conference to test its potential.

A few months later, Vicky sees an article in the medical press about her invention. But wait, it’s attributed it to BigMed, the medical devices company, who have filed a patent and want to go to market as soon as possible.

They stole my idea?!

Outraged, Vicky contacts the company for explanations. She is told that they checked and there was no patent on the invention, so they decided to file themselves after making a few improvements to the prototype.

Vicky contacts her lawyer, determined to reclaim her rights on the invention, but it’s not looking good:

Vicky, you could have avoided the situation by:

Read more about how to protect your invention when engaging with third parties. 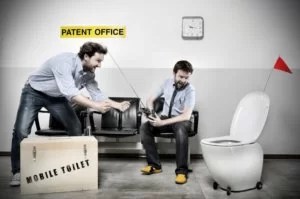 Victoria Ferguson / About Author
Victoria is a former member of the L&P team and continues to contribute articles. She is an experienced commercial lawyer and worked for more than 7 years as a senior associate at Logan & Partners. Victoria currently works as an in-house counsel at the UK's Met office.
More posts by Victoria Ferguson
We use cookies on our website to give you the most relevant experience by remembering your preferences and repeat visits. By clicking “Accept All”, you consent to the use of ALL the cookies. However, you may visit "Cookie Settings" to provide a controlled consent.
PreferencesAccept All
Manage consent